Elizabeth Mumford grew up on a farm in the Midwest, but spent every summer on Cape Cod and became an avid sailor. Today she is painting professionally full time and lives with her son in the Victorian family house of her childhood.

Liz majored in Fine Arts at Smith College in Northampton, Massachusetts, received her Master of Arts in Teaching at Tulane University in New Orleans, and taught art for nine years in private schools in Indiana and Hawaii.

Her style is influenced by American Folk Art, as well as, Flemish painters of the 16th Century, primarily Breughel. Liz’s “signature” is a black painted border with bronze stenciled corners and red letter text wrapping around the painting.

Liz feels as though her paintings develop like a play.  The text reflects the setting, which she paints first, sketching out a rough idea of what each figure is doing to complement the verse.  However, as a painting develops, stories evolve from the actions and settings; it seems that the painting takes off on its own to tell a story Liz may not have intended. Once in a while, she even has to change the words to reflect that development. 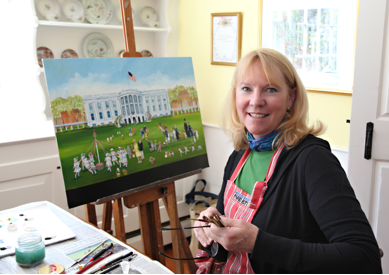 When Liz is not painting, she enjoys spending her time sailing, gardening and cooking.  Her work now hangs in several museums and numerous private collections in the United States and Europe.